This came in the mail today. 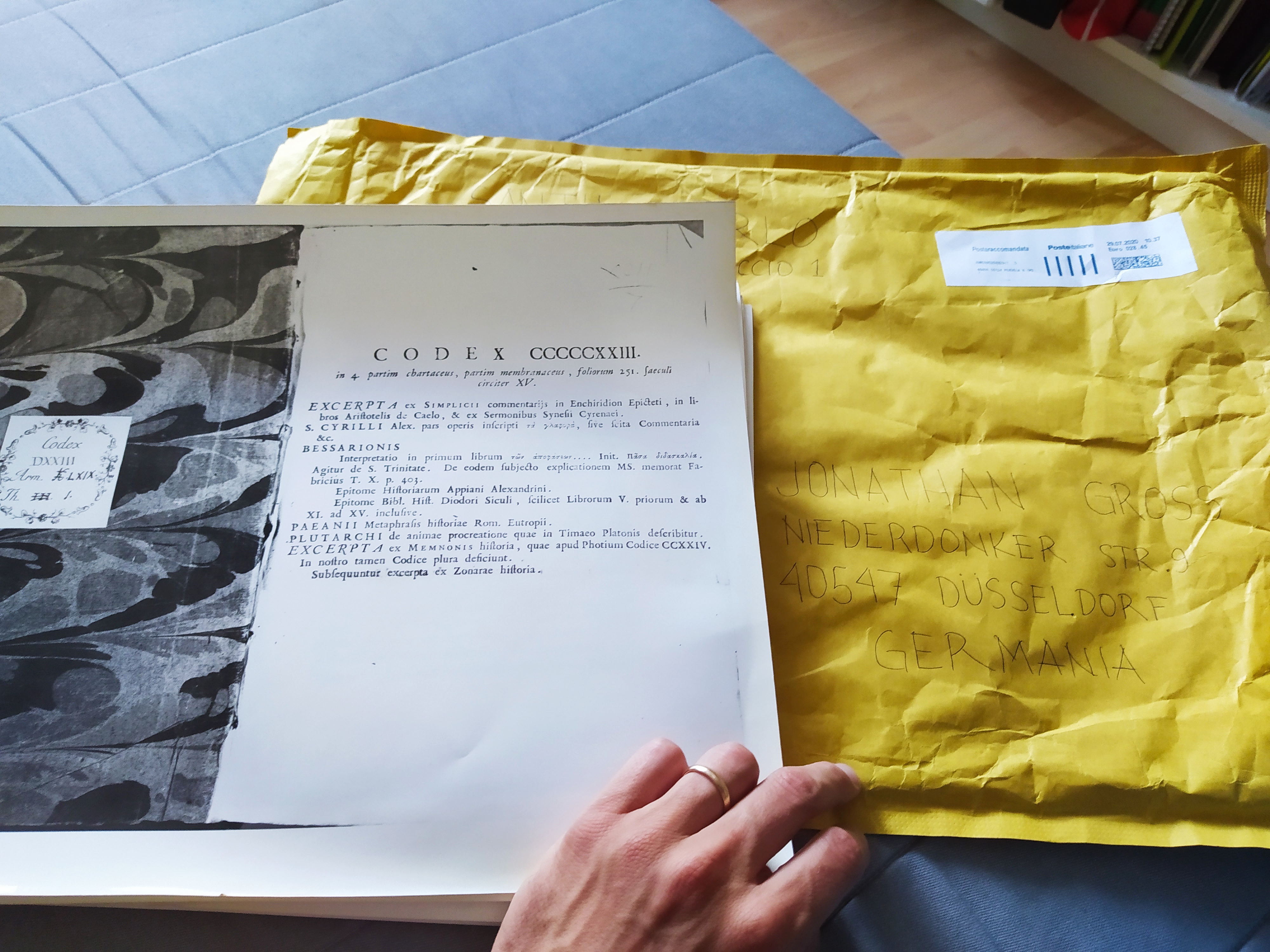 Prof. Carlo Santini, who edited Eutropius in the Biblioteca Teubneriana in 1979, most generously sent me photographs of a part of Bessarion’s composite codex of philosophical and historiographical Greek texts (donated to the Biblioteca Nazionale Marciana in Venice after his death 1472, Diktyon no. 69994). The Paeanius text, as already noted by Hans Droysen in 1879, is a direct copy of Laur. Plut. 70,5 (= L, Diktyon no. 16570).

As I already assumed in my most recent paper (“On the Transmission of Paeanius“, GRBS 63,2020,487-309, DOI 10.5281/zenodo.3960022) the Paeanius text is copied from the Laurentian ms. but independent of all younger copies. My assumptions were based on a few pages that Ciro Giacomelli kindly shared with me in February, 2020. What’s more, he promised me to photograph the rest of the text on his next visit to Venice. But that was before the plague hit.

Now, through the generosity of Prof. Santini, I can corroborate my earlier assumptions: The manuscript has the same defects as its parent, but does not copy all of its marginal notes. Because the other copies retain more of these notes, they must be independent of the Venice manuscript and are rather copied directly from L.

Two things are particularly interesting in this textual witness: Its text is in at least three places superior to its parent (avoiding needless gemination in proper names), in two of them it corresponds with its grandparent, ms. Iviron 812. And for the large gap in the middle of the text (book 6, chapters 9–11), Bessarion’s ms. leaves nearly two pages empty – apparently in hopes of eventually finding and restoring the missing text.

If only he had ventured to Mount Athos.

Making research materials available online has become even more important in times of lockdown and reduced service from and access to public research institutions.

The Bavarian State Library, a long-time forerunner in making their valuable collections available online, recently uploaded another batch of digital images from their treasury of Greek manuscripts. One of them preserves some rare historiographical and rhetorical Greek texts and can now, through a digitisal copy of its black-and-white microfilm reproduction, studied from the comfort of your home.

Cod. Gr. 101, written around 1555 in Northern Italy, was described in detail by M. Molin Pradel, Katalog der griechischen Handschriften der Bayerischen Staatsbibliothek, vol. 2 (Wiesbaden 2013) 279–286. Information about its age, scribes, possessors and textual contens can also be found in the Pinakes database (Diktyon no. 44545).

My interest in this manuscript is due to the fact that it is one of only five extant manuscripts transmitting Paeanius’ Metaphrasis (Translation) of Eutropius’ Roman History. The Munich witness of this text was studied extensively by Ernst Schulze (1870), and later by Spyridon Lambros (1912) who both (indepent of one another) proved it to be a copy from an older manuscript, Laur. Plut. 70.5 (Firenze, Biblioteca Media Laurenziana, Diktyon no. 16570,  also available online). The Munich ms. thus has value not as an original textual witness but as a possible source of scholarly conjectures to the text.

So far, checking the first 51 folios of the ms. has proved fruitful as it has yielded half a dozen corrections to the text – granted, all are easy corrections and have no ground-shaking consequences, but they are testiment to the critical acumen of its scribe or his supervisors. And they predate the first printed edition by more than 30 years.

Of course, a black-and-white microfilm can only take us so far. I have not been able, for example, to ascertain or even locate two notes in the ms. reported by Lambros (1912) 114–115 saying that the manuscript had been lent to Gotha librarian August Beck in 1868 (who requested it on Schulze’s behalf) and to Theodor Mommsen in 1872 (who used it to prepare an edition of Paeanius). To this end one must consult the object itself, not a copy from a copy.

I’ve started this blog to share information on my research. A classicist by training, I find pleasure in discovering old visual artifacts (be it text, image or something else) which transport meaningful messages through space and time. I love extracting those messages (or, if that’s not possible, imagining a possiblem message) and sharing them with others.

This blog will predominantly be about my studies in Greek and Latin texts, but also on any other dusty topic that is just waiting to be brought to life.

This site is part of Humanities Commons. Explore other sites on this network or register to build your own.
Terms of ServicePrivacy PolicyGuidelines for Participation